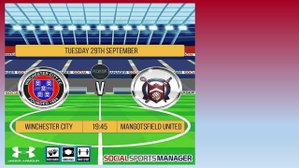 Winchester’s first home league match of the season yielded three points against a young Mangotsfield side, and the 5-1 victory moved them to the top of the table after two matches.

It equalled their best ever win against ‘The Mangos’, having beaten them 4-0 two years ago when Tyrell Mitford scored a hat-trick. However, on Wednesday, AFC Totton replaced them at the top of the table.

Despite being a relatively young side, Mangotsfield were unlucky to lose to the much-fancied Frome Town side, on the opening day of the season.

The Citizens announced an unchanged starting line-up from the previous Tuesday, with the recently re-signed Ollie Griggs on the sub’s bench.

City made an excellent start, taking the lead in the third minute, with Ollie Balmer netting from a fine team move. It became 2-0, just five minutes later when Ollie Balmer again found the net with a well-executed lob.

At this stage, the hosts were well on top but the visitors found their way back into the game with both George Neill & Harry Simons testing City’s keeper Charlie Philpott, with strong drives on target. Mangotsfield pulled a goal back in the 56th minute through Harry Simons, who netted following a goalmouth scramble.

Mangotsfield’s joy was short-lived as Jamie Barron restored City’s two-goal lead five minutes later. Winchester were then awarded a penalty but Jamie Barron’s effort was saved by keeper Jakob Glover at the expense of corner.

From the corner, Kieron Douglas headed home the fourth, and Max Smith added the fifth in stoppage time.

The next game at Cossham Street will be the visit of ‘The Rovers’ of WILLAND on Tuesday 6th October 2020. Kick-off 7.30pm