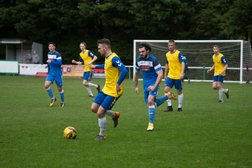 A vastly more experienced and physically stronger Larkhall side featuring 8/9former Mangotsfield players in their squad were too much of an obstacle for our youngsters to contend with at Plain Ham on Saturday. As ever there was no lack of enthusiasm or effort from our lads and for the first 30 minutes or so we battled to keep the Larks at bay.

On 32 minutes, however, a firmly struck shot hit a defender’s arm and Referee Mr. Fudge deemed it worthy of a penalty. Lewis Powell opened the scoring for our hosts from the spot and a loss of concentration saw Larkhall increase their lead when Mike Baker headed home from a corner, before a neat one-two on the edge of the Mangotsfield area saw Joe Tumelty free to put the home side into a commanding 3-0 lead after 37 minutes which remained the score-line at the interval.

The towering Larkhall centre-backs gave our somewhat lightweight forward line little opportunity during the first 45 minutes but a change to the line-up for the second period saw a much more evenly-contested affair. Striker David English saw a shot saved by the outstretched boot of home keeper Shaun Semmens and then the same player went through but placed his shot wide of the right-hand post when he might have done better. Thereafter the game saw few opportunities at either end, and after 90 minutes we remain rooted to the foot of the table having failed to open our account for the season.

We battle on regardless and look to continue playing the right way in the hopes that a little good fortune may eventually come our way !

The next game at Cossham Street will be the visit of ‘The Foresters’ of CINDERFORD TOWN on Saturday 17th October 2020. Kick-off 3.00pm