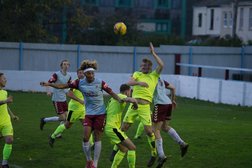 A Joshua Parsons brace in the first half, followed by an Aidan Bennett header towards full time, were enough for Cirencester to see off a youthful & spirited Mangotsfield United in front of 230 at Cossham Street.
The early pressure was exerted by the home team with some unproductive forages down the visitor’s left, but after 10 minutes, the away side began to take control. Thomas Handley had a headed goal from a free-kick disallowed for offside, and then Joshua Parsons shot narrowly wide, on 22 minutes, when well placed.

The same player was upended by Matthew Binding in the box, three minutes later, and he despatched the resulting penalty into the roof of the net, to give ‘The Centurions’ a deserved lead.

The Field responded with a Harry Simons dipping volley from 25 yards that just cleared the bar.
Just when it appeared we would enter the break just this single goal in arrears. the gusty wind contributed to a miskick by a defender and fell nicely for the preditory Parsons to notch his second of the afternoon.

In a scrappy second half, John Dennis came close with a free-kick and substitute Levi Irving should have put the game beyond ‘Mangos’ reach, but his free header from a superb cross failed to hit the target. Minutes later, he received his marching orders for a second yellow for an innocuous challenge down the Mangos’ right. He had been on the pitch for just 6 minutes.

As the match entered the final few minutes a long, looping cross from the left caught in the wind and caused confusion between goalkeeper Jakob Glover and a defender allowing Aidan Bennett to float a header into the far corner. A seventh straight league defeat means we remain rooted to the foot of the table, but with the bleak Coronavirus outlook who knows whether we will be able to complete yet another frustrating season !!

The next game at Cossham Street is uncertain at this time, due to Lockdown (Covid 19)