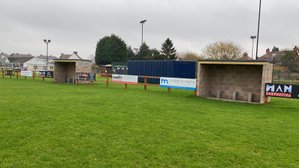 Manor Park RFC’s longest and most loyal sponsor, Bates Timber, has reaffirmed its commitment to the club.

The Coventry-based firm run by former Manor Park RFC player Pete Bates has not only provided the wood for the club’s new dug outs - but has also agreed to sponsor one to the tune of £500.

If that wasn’t enough, the company which has adorned the front of the club’s home shirts for more than a decade will also appear on the rear of the new members polo shirt manufactured by Matt Sports.

It is a timely boost for Manor Park as we haven’t played a game since February 22 due to the Covid-19 pandemic. But that hasn’t stopped progress being made with many projects being carried out by dedicated volunteers.

Chief among them is the building of two pitchside dugouts which will have the finishing touches put to them this weekend.

“It’s been a testing time for us all being denied doing what we love most, playing rugby, but it’s wonderful that projects like these have been achieved when it has been safe and appropriate to do so,” said club president John Jenkins.

“Bates Timber are at the beating heart of this club and we thank them eternally for all they do for us. Nobody takes a penny out of this club and all of the money we can bring in, is reinvested in keeping us ticking over.

“We look forward to hopefully having people up there soon to see them in the not-so-distant future.”