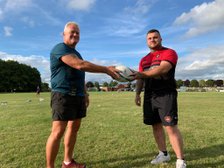 Manor Park Rugby Club has added to its coaching team with the announcement that Stephen Ballard has been appointed as forwards coach.

'Spud' joined from Nuneaton RFC in the summer of 2015 helping to secure a league and cup double in his first season. However, a neck injury has limited his playing opportunities during the 2019/20 season.
The front rower, who has also featured on the back row and at fullback for the Red and Blacks across his five-season stay, was keen to remain a part of the set-up.
"This is my buy-in now if I cannot play as often as I would like to, to give something back," he said. "I came to Manor Park to get some games under my belt after some injuries and here I am, five years later, still with the club. It's a club and a group of lads I have grew to love.
"I hope I can help bring something to the coaching team as we prepare for when we can get back on the pitch and playing rugby again."
Ballard joins a coaching team that is headed by Kevin Venus, who is into the second season of his second spell as head coach following the first which ran from 2015 until 2017.
He is also assisted by his former Manor Park teammates; Steve Ross, Matt Marston and Nick Bishop - all of whom have helped steer the club through two months of pre-season training so far.
Venus was delighted to have Ballard on board. He said: "While we would love to have him on the pitch week in, week out, to have Spud helping players out, especially in the specialist front-row positions, will be invaluable for us.
"I'm proud to play a part in a club that invests in promoting from within and does not pay for support coaching wise. Any person within our club who shows a keen interest will be given that opportunity and I am happy to guide them along that journey."
Share via
FacebookTwitter
https://www.pitchero.com/clubs
Recent news