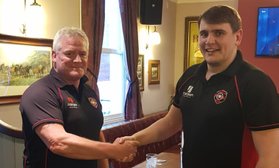 Returning Manor Park head coach Kevin Venus has made his first big signing ahead of the 2019/20 season.

Venus was voted in to the role at last month's annual general meeting, replacing the outgoing Nick Bishop who guided the club to its best-ever finish of sixth in Midlands Three West South.

This week he has successfully negotiated the acquisition of Adam Ross from Nuneaton RFC. The 29-year-old hooker/back row has National League experience at Liberty Way and joins Manor Park in a player/coach role.

Venus said: "I have known Adam since he was a young lad, he has had a fantastic career playing both first team and development games for the town's senior club . He has a massive amount of talent and history for playing the game at a high tempo.

"He will be bringing a lot of technical knowledge with him that can only enhance how we play in the coming season. I am looking forward to watching what he brings to the party both as a player and coach.

"Adam will also get the chance to work along side his father Steve, a long standing coach and ex captain of Park."

Venus, one of Manor Park's most-respected former players, guided the club to promotion as head coach in 2015/16 losing just one game in Midlands Four West South. He also secured Warwickshire Vase glory at Broadstreet RFC with victory over Claverdon before his time in the role ended having ensured survival in Midlands Three West South with an eighth-place finish in 2016/17.

Ross pointed to the importance of working with Venus as a key reason why he is making the switch to the Griff and Coton club.

He said: “Kev is a highly-respected and experienced coach and it’s a perfect opportunity and environment for me to make the next step in my rugby career into coaching.

“It was a big decision for me to leave Nuns, a club where I’ve played my entire adult life as well as a mini, junior and colt. It’s not a decision I’ve taken lightly and I am very grateful for everything that club, coaches and players have done for me.

“But now it is all about Manor Park RFC and doing what I can to help the club build on very solid foundations after three successive seasons in Midlands 3 West South.

"It's also a big draw to team up with my dad, Steve, who served the club as a player for many years before taking on coaching roles. I'm looking forward to working alongside him."

Pre-season training commences on Tuesday, June 18 from 7pm on the fields adjacent to the Jubilee Sports Centre. All are welcome to come along and join in. For any enquiries please email the club by clicking here.