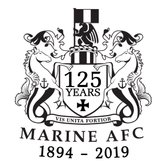 BetVictor Northern Premier League Marine have issued an appeal for donations to help the football club get through the financial impact of the coronavirus crisis which has resulted in the closure of the Marine Travel Arena and its clubrooms. The closures have had a sudden and devastating impact wiping out entirely the income from the bars and the stadium.

Marine Football Club, celebrating its 125th anniversary, has had an excellent season chasing a promotion play off place until the FA this week declared the season over with all results null and void. The stadium has been closed since the FA issued a suspension of all football on 16th March just two days after Marine enjoyed their highest attendance of season, nearly 700 against Ramsbottom Utd. The Clubrooms have been closed since Saturday 21st March when the government closed all bars, clubs and restaurants in an effort to help stop the spread of the virus.

Marine Chairman Paul Leary said:
“The closure of sports grounds and bars by the government in an effort to help stop the spread of the coronavirus was absolutely essential and is completely understandable. The financial impact of the closures have been devastating for football clubs, and we have seen our bar and stadium incomes come to a sudden halt. We will be applying to Sefton Council and HMRC for some of the government financial assistance that has been made available, but whilst these are a help it will not be enough to see us get through this unprecedented situation.

I appeal therefore to our members, supporters and to the general public to help us by making a donation by clicking HERE or if preferred by sending a cheque to Secretary Richard Cross at 74 Elvington Road, Hightown, Liverpool L38 9AN making it payable to Marine AFC.”

Paul Leary added:
“Marine Football Club has survived and prospered for 125 years and I am sure with everyone’s help we shall secure the future of our club that has so much reputation and standing in the local community and in non-league football. This is our biggest challenge ever but we shall get through it and come out stronger”