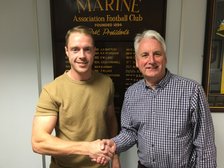 Marine AFC are delighted to announce that Club Captain and leading goalscorer Danny Mitchley has signed a new contract which will keep him at the Marine Travel Arena until May 2020.

Danny, 27, netted 27 times in 44 appearances for the Mariners last season and is a key part of Manager Tommy Lawson's plans, the club not losing any League game that he scored in during 2016-17.

He had a brief loan spell from Altrincham starting in December 2012 (4 games, 2 goals) before joining the Mariners in October 2015 from Skelmersdale United, scoring 19 goals in 42 appearances in 2015-16.

"Danny has led by example as Club Captain this season and has a phenomenal goals to games ratio for Marine at better than a goal every other game.

He's also not gone more than five games without scoring all season, and is the type of regular goalscorer and team player that every club wants in their side.

We are absolutely delighted that he has agreed to stay with Marine and look forward to many more goals to come from him."