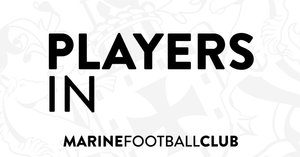 Marine AFC are pleased to announce the following players have signed for the club:

Harry BLACKBURN, 18, striker who started with Accrington Stanley and had a spell at Skelmersdale United last season.

Jack FLEMING, 18, a central defender who came through Tranmere's youth system, making his debut for Rovers in their final League game of 2016-17 at Maidstone United.