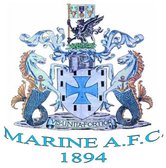 There are definite signs that the class of 2012 are starting to gel as a team rather than eleven individuals, solid at the back and with pace and movement up front.

Nick Rogan and Andy Fowler put in a hardworking shift at the business end of the pitch, the former opening the scoring by steering home Michael Ordish’s tasty cross from close range after 8 minutes.

Nine minutes later it was two, Fowler chasing down a short goal kick to win the ball and free Liam Rice, the former Port Vale man beating two tackles in the box before netting with a cool finish inside the near post.

Ordish provided several good crosses, with another one almost providing a third goal for the Whites with John Shaw’s shot blocked by Adam Judge in the home goal.

Town put the Marine defence to the test midway through the half, John Cass seeing a cross shot blocked for a corner before Mick Douglas sent a header wide from Liam Shipton’s centre.

The Mariners though looked continued to look dangerous coming forward, and they got a third goal on 31 minutes, Rogan putting Fowler clear for the striker to advance on goal and rifle an angled drive in to the bottom corner of the net.

Fowler nearly decapitated the Chairman with a powerful volley with Wire replying at the other end, Peter Doran flashing a shot across the face of goal and John Miles having a free kick deflected over.

The early stages of the second half saw much of the same, Marine’s dominance emphasised by a fourth goal after 54 minutes, Fowler setting up Rice to slide home his second of the night from twelve yards.

Both sides made a raft of substitutions as the half wore on with Warrington coming back in to the game, Callum Williams making a couple of good saves and Liam Duff heading one effort off the line but Town were unable to grab a consolation goal.