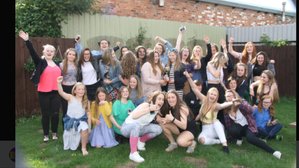 Celebrating "Team of the Year" at their end of season Dinner

As another Season came to a close, the Girls of Market Harborough RUFC certainly had something to celebrate. In recognition of increased numbers across all 3 age groups (U13s, U15s & U18s), the Girls were awarded the "Team of the Year" by Club Chairman, Phil Jarvis. In addition, the Club was very proud of the continued success at Representative Level across U15 & U18 age groups:-

At the End of Season Awards, the following players were recognised: -