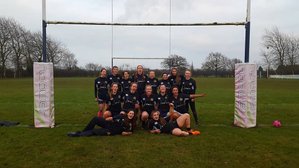 U18 Girls start the New Year with an impressive performance

The Market Harborough / Loughborough / Oakham Cluster started the New Year with a friendly fixture at Newark RUFC. The travelling spectators were treated to a fine all-round team performance, with no less than 17 tries amassed over the 60 minutes.

Half-Time Score was 53-5 with scores coming from

In the 2nd Half, a further 8 tries were added