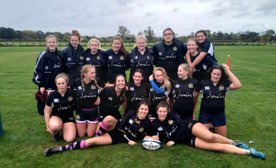 Harborough courageous in the Cup

The Market Harborough U18s faced Old Northamptonians away in their latest cup match on the third Sunday in Advent. Both sides were unbeaten in their group so far and the Harborough girls were relishing the challenge of playing against the strong Northampton side. They were determined to surprise them with a fast expansive game that moved the heavier and less mobile ONs around.

Harborough started strongly, moving the ball quickly away from the contact areas to release the speed of their backline; for the first 20 minutes it was virtually all Harborough. Strong forward defence led by Phoebe Andrews forced the ONs into errors that allowed Harborough to capitalise. Within minutes Sabine 'Beanie' Brewster powered over for the first try after some slick handing by the team. A few minutes later, Cassie glided over in the corner for an excellent try after some quick phase play left the ONs unable to keep up with the swift movement of the ball from one side of the pitch to the other. 12 - 0 (Hannah W a conversion) after 15 minutes was the perfect start. Line speed was good, with Fran notably knocking her opposite centre backwards as soon as she received the ball.

In the second quarter Harborough continued to threaten, gaining good ground repeatedly with some intelligent play down the blind side by Ella, Hannah W, Grace and Emmy. However, after 20 minutes Phoebe was forced to leave the field with an injury that meant Harborough had to play the rest of the match with a player short. This fact, combined with some excellent driving forward play by ONs, gradually saw the balance of play begin to turn. ONs realised their strength lay in driving forward play, and time and again their forwards drove close to the rucks gradually forcing Harborough deep into their 22. In the end, the tries came for ONs who scored four unanswered tries in the next 15 minutes with some impressive forward play. Harborough finished the half strongly though, scoring another try through yet another 'Beanie' burst through the centres.

At half time, the Harborough girls knew the second half would be tough. A player down, and playing up a slight slope it was going to be tough against an ONs squad of over 20 players. The fact that the ONs coaches chose to keep the extra player on the pitch after Phoebe's injury was a reflection on how strong they felt the Harborough girls were. ONs did score 5 more tries in the second half, but the Harborough girls made them work hard for every point. In defence the girls were magnificent, time and again making try saving tackles to deny the ONs. Captain, and scrum half, Ella Herbert led from the front during this period, making tackle after tackle to stop the big ONs forwards - her tackle count for the day was off the scale by the end of the game.

The team have developed into a skilful unit in the last few weeks. They enjoy playing for each other as a team and always show a collective positive attitude on the pitch. The forwards are mobile and strong, complementing the speed of the backline. The front row of Amber, Phoebe and Pippa were always very competitive against bigger opposition and ensured the side won their share of set piece ball. Their running and handling was far superior to their opposite numbers. The loose forwards on the day - Mairead, Hannah J and Lucy - were mobile and skilful, tackling well above their weight throughout the game, as well as doing well in the line out. The backs continued to run the ball from deep in their own half despite being a player down and eventually managed a well deserved try through winger Emmy, when she broke free from within her own half and outpaced the ONs defence for a super try. It was good to see Hannah W back from injury, combining well at half back with Ella to ensure our attack was varied and sharp. The centres, Fran and Beanie, were a strong combination all afternoon, and the wings Cassie and Emmy had fine games both in defence and attack. Grace, at full back, was also her usual potent self in both defence and attack through the game.

After the game, the girls resolved to win their next cup game against Kettering in January, qualify for the knock out stages, and then do all they can to reach the area final in the hope they can play ONs again with a full squad. The new year should see the return of Tia, Eve, Sophie and Ruby after injury, and hopefully the availability of others to boost their strength. With a full squad the side will undoubtedly continue to build on the excellent rugby they have played over the last few weeks.

Finally, our thanks to all the parents and supporters for all your commitment to the girls so far this season. The second half of the season promises to be full of exciting running rugby!