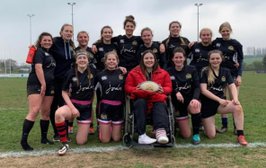 Harborough U18 Girls put on a great display of running rugby

The U18 Girls had their final home game of the Season on Sunday against Lutterworth.

As numbers were depleted, some players were drafted in from Leicester Forest (Zoë Frew & Kathryn Jolly) & Hinckley (Klaudia Urban & Jayme Kennedy). Many Thanks to our neighbouring clubs for supporting us.

The Game itself was a fitting finale with a fantastic display of running rugby. With the lead changing 3 times, it was a very closely fought contest. Final Score was 55-55. Harborough Scores came from: -

Everyone put in 100% and made the Coaches extremely proud.

Special thanks must go to the following Girls who played their last ever home game for Harborough: -

Wishing you all the best for the future.