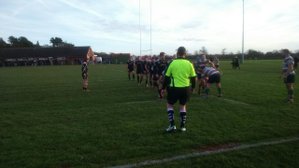 This much anticipated encounter between local rivals did not disappoint. However a series of missed opportunities led to a last minute 16-15 defeat.

There was added interest with both teams sitting at the top of Midlands 2 East (South). Market Harborough travelled the short distance west intending to maintain their unbeaten league record.

Lutterworth began the game strongly, as expected, pinning the visitors in their own half. A misfielded kick on the Harborough left allowed Lutterworth to mount a prolonged attack which was finished off by their loose head prop who bundled over for a 5-0 lead after eight minutes. This galvanised Harborough into action as they began to take the game to the home team. They looked threatening every time they had the ball using a combination of strong running forwards and incisive backs. Some of this good combination work produced the first try as Joe Margetts went over in the corner to make the score 5-5.

Harborough continued to dominate as their aggressive defence gave Lutterworth few opportunities to play their usual brand of free flowing rugby. On the half hour, the ever reliable man of the match, Michael Woodford, crossed the line to score Harborough’s second try. Billy Blair converted to make the score 5-12. There was only one more score before half time. A Blair penalty for a 5-15 half time lead.

Playing with the slope, Lutterworth began the second half as they did the first, putting the Harborough line under pressure. But the defence held firm repelling wave after wave to maintain the status quo. Harborough struggled to keep the ball for any length of time which meant they could not relieve the pressure or mount any kind of meaningful attacking threat. Lutterworth scored a penalty to reduce their deficit to 8-15.

Harborough continued to defend valiantly to deny the home team to score any further points with Ed Bale to the fore, making sniping runs and marshalling his forwards. But the Lutterworth pressure finally told with a second try to close the gap to 13-15.

With only minutes on the clock, Harborough escaped their own territory to secure a penalty out wide and only five metres out. A kick for goal was not an option because of the strong wind and the kick for touch option was rejected because the lineout had not been working for most of the game. The tap penalty did not work and allowed the home team to escape down the pitch back into the danger area. They played phase after phase trying set up a drop goal opportunity. But at the final ruck, a Harborough player encroached off side as the drop goal attempt was charged down. With the last kick of the game, Lutterworth took the spoils with a penalty to make the final score 16-15.

Whilst this was a hard defeat to take. We have look to ourselves because we did not play to our patterns or look after the ball well enough.

What must not be lost is the fact that this is only one match in a long season. We played very well in the first half and were architects of our own downfall in the second. This result hurts, but we will be back. It all starts at training this Wednesday.