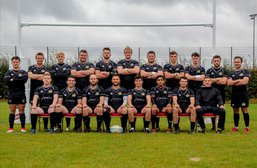 Harborough made the worst possible start to their game away at Olney on Saturday and it probably cost them a win.

Harborough made the worst possible start to their game away at Olney on Saturday and it probably cost them a win. With a swirling wind kicking was never going to be easy and so it proved as their kick off failed to go 10 metres and from the resulting scrum Olney won quick ball, stretched it wide and outpaced the Harborough defence to run in under the posts for a try put them 7-0 up within 2 minutes. Worse was to follow as Olney attacked again and soon went over for another try to lead 12-0 within 5 minutes. Harborough were now up against it but showed that their recent good form was not a fluke as they fought back and came close on a number of occasions. They had to wait until nearly half time to get the score they deserved when after a series of forward drives the ball was stretched wide for Harry Durham to touch down wide out. The conversion was missed but a 12-5 deficit at half time would have been just reward for Harborough’s efforts; sadly it was not to be as from the kick off Harborough secured the ball but their relieving kick to touch was adjudged to have been from outside the 22 and Olney were awarded an attacking line out. After a series of drives they powered over the line to restore their 12 point advantage, 17-5 at the break. To their credit Harborough upped their game and looked the better side as the second half started. It did not take long to reduce the deficit as the rampaging Ethan Godefroy went on a run, the ball then reached Lewis Townsend and when he was held up he gave the ball to Ed Parker who made good ground to release Jack Williams whose pace was enough for a touch down wide out, 17-10. Harborough were then awarded a penalty but unfortunately the ball rebounded off the crossbar. It was not long however before Harborough reduced the deficit further as Parker burst from near his own 22 and although he was eventually tackled close to the try line he was able to offload to the supporting Lee Butler to touch down to bring the score to 17-15. Harborough then turned the game on its head as they attacked again with Parker again involved as he put through an excellent kick and although Olney secured the ball their clearance kick was charged down by Godefroy and Butler was once again on hand to touch down for Fraser Harrop to convert and out Harborough 22-17 in the lead. Olney now stormed back but good defence kept them at bay but once again the wind played its part as from a penalty kick the ball failed to find touch and Olney ran the ball back to touch down for a converted try to retake the lead 24-22. This became 29-22 as they once again used the power of their forwards to cross the line. This time the conversion hit the outside of the post. And at 29-22 Harborough still had a chance and they came close as yet another excellent run from Parker with the last play of the game resulted in him touching down. Unfortunately he could not get near to the posts and the conversion attempt hit the post leaving Harborough with only a consolation of 2 points for a losing bonus and a try bonus for their 5 tries. With 8 defeats now by only a few points Harborough need to look closely as to how they can turn these into victories, if they succeed they will be challenging for promotion again next season.
Share via
FacebookTwitter
https://www.pitchero.com/clubs
Recent news