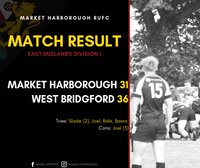 For the second time in a week Harborough conceded a last-minute try to leave them counting the cost of a sloppy first-half defensive performance.

An entertaining, but frustratingly loose first half ended 26-29 to the Nottinghamshire side as both teams looked to place with width and pace. An early penalty by the opposition 12 was cancelled out just a couple of minutes later after some great play by last year’s Colts player of the season, Joe Lafferty. He took a quick tap penalty and weaved in and out before hitting Lee Butler who ran a great support line, taking him right up to the opposition try line. The ball was moved quickly to Harvey Slade who cut through the remaining defence to score.

On 18 minutes Harborough were once against masters of their own downfall when trying to run the ball from their own 22 from a midfield scrum. The ball was knocked loose and gathered by a West Bridgford player who charged home for a gift wrapped try.

Straight from the kick off however, Harborough were gifted a try of their own. West Bridgford looked to spread the ball wide which presented Laurence Joel with the opportunity to use his pace to come up quick in defence and snatch the ball from the attackers grasp. With no cover defence able to get near the Harboorough centre he was able to score the try under the posts before the try himself, leaving the score 14-10 to Harborough after 20 minutes.

The visitors then took advantage of some soft defence to score 3 tries in a disastrous 10 minute period to take a 15 point lead. This could easily have demoralised Harborough's young side, but they were not cowed and in fact hit back with 2 of their own before half time. Chris Bale picked from the base of a scrum close to the try line to bounce the opposition 11 before scoring. A couple of minutes later Harvey Slade collected a clearance kick in between his own 10 and 22 metre lines and used his pace and eye for a half gap to break through to score a great solo try. Half time and Harborough were ont he wrong side of a 26-29 scoreline.

The second half was much tighter but Harborough got off to a great start as once again, Slade ran a kick back before feeding Chris Bale who ran a tight line and offloaded the ball out the tackle to keep the counter-attack flowing. The ball was worked to Milkha Basra who ran the ball home to give Harborough the lead. The conversion from Joel made it 33-29 and Harborough had the lead for the first time in 30 minutes or so.

That’s how the score remained for the next 35 minutes. The visitors piled on the pressure as they went searching for the win but Harborough’s defence had warmed up by now and remained solid in the face of a veritable onslaught. Penalties conceded by the opposition gave Harborough the chance to clear their lines to relieve some pressure with promising field position, but these opportunities were not taken full advantage of.

The scrum had been hugely impressive yet again but unfortunately the line out did not possess the same reliability, and this presented possession back to Bridgford on a number of occasions as they ramped up the pressure. Eventually this eventually proved decisive as the visitors kept the ball tight and slowly worked their way to the try line, scoring the winning try with just over a minute remaining.

This is a hugely disappointing result as the Black Cats had shown great determination to not only put themselves into a winning position, but to resist the more experienced side for nearly the entire second-half. Again, they can take a great number of positives, especially the continued good form of centre Laurence Joel (especially with his boot) and full-back Harvey Slade whose running lines in broken play have caused havoc with opposition defences all season.

The boys have the chance to bounce back against Melbourne at home this Saturday 12th October.