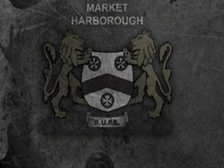 Market Harborough Colts squeezed into the fourth round of the National Cup Plate by the narrowest of margins. Rescheduling a game that was rained off before Christmas, they travelled to Peterborough with only 16 players. Having majestically disposed of Burton on Wednesday 36-15 with a full squad, they were now restricted to U18's and with several withdrawals their preparations were not good. However Harborough made a bright start and controlled the game for the opening quarter. Worryingly, despite this advantage the scoreboard remained unmoved and Harborough seemed unable to find a way to Peterborough's line. Fortunately the ever dependable Jonny Davies came to the rescue with a strong burst from a Ryan Gibson offload to score on the blind side. No conversion gave Harborough a slender lead at half time.

As the teams turned round, Peterborough were becoming ever more confident and Harborough's possession had all but dried up. Whether Wednesday's efforts had sapped their strength or the opposition had found a new gear, Harborough looked in trouble. A strike against the head for Peterborough left the Harborough backs on the wrong side of a defending scrum and a simple backs move gave Peterborough a deserved score. Although a draw would have given the visitors the match, this was academic as a careless penalty gave the hosts an easy 3 points and Harborough looked beaten. Despite advancing to within three meters of the Peterborough line, Harborough were turned over again and the match appeared over. One last attack from a lineout saw Josh Haynes loop with Kieran Hammond and feed the ball wide. Once again Davies picked up the ball and cantered wide of the opposing winger to race under the posts. 12-8 and 1 minute remaining, Harborough clung on until the referee blew for time. A mighty relieved Harborough must now travel to Twickenham RFC for the next tie.