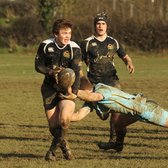 Colts at the top of their game and demolish Worcester

Harborough Colts were at the top of their game on Saturday when they demolished Worcester to reach the last 16 of the U18 National Plate competition.

With a wet and muddy pitch and missing a few regulars this was a 'man of the match' performance from the whole squad. From the kick off Harborough ran at the visitors and within 5 minutes the home side were 12-0 up.

The first try came from Laurence Joel following a blistering run and the second straight from the kick off by Ed Parker following good work by George Thornton. Harborough continued to dominate but Worcester proved that they were no pushover as their defence held firm. Their plan to use their big number 12 proved to no avail as Harborough’s midfield and back row tackled him out of the game. Any hint of a line break by the Worcester forwards or backs was repelled by fearsome Harborough tackling.

The half-time score did not reflect Harborough’s dominance, but Worcester made sure Harborough had to go and win the game.The second half belonged to Harborough as they moved up a gear and ran Worcester ragged.

The home side began to dominate both scrum and line out and the introduction of James Stubbs at 9 and Jack Digby at prop proved decisive against a tiring Worcester. First the outstanding Thornton took the ball at speed from a ruck to burst through and run in from 30 metres. Parker then added the first of his 2 second half tries, while excellent interplay by Digby and Joel Nance enabled the latter to touch down. Joel Nance converted 4 of Harborough's tries to make the final score 38-0.

Harborough will want to match this performance,next Saturday, when they entertain Whitchurch at home in the next round.