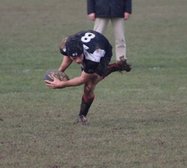 Harborough Colts power through to semi-final of National Plate

Harborough Colts stormed through to the semi-final of the National U18 Plate with an overwhelming victory at Sheffield Tigers.

Although Harborough dominated the early exchanges they could not break down the Sheffield defence and it was the home side that scored first after 30 minutes when from turnover ball they moved the ball wide and ran in an excellent try from the halfway line.

This galvanised the Harborough players who struck back quickly and an excellent move by the back line saw the supporting Laurence Joel take the ball in space to touch down for a try that he converted. Determined not to give away further points the Harborough defence stood firm and this led to an interception by the excellent Joel who ran in unopposed for a second converted try to bring the half-time score to 14-5 in Harborough’s favour.

In the second half Sheffield began to tire and Harborough’s fitness told as they capitalised first through Jake Noble who danced down the touch line to score an unconverted try. Harborough pressed again with man-of-the match George Thornton held up just short but from the resulting scrum, Harborough worked a pre-planned move with the ball going wide for Iain Barnett to touch down. The conversion hit the post but Harborough soon made it 29-5 as the determined Thornton powered over for a deserved try.

Further tries from the ever-present captain, Timmy Waterfield, Josh Wright and James Coomber with 2 conversions by Joel saw Harborough run out winners by 48-5 and secure a home semi-final against Pocklington. A well-deserved reward for an excellent team performance.