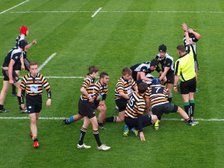 Harborough Colts scored a last minute try and conversion to tie the match 15-15 and share the County Cup with Oadby Wyggs.

In a highly competitive match on a balmy evening at Welford Road both teams served up an entertaining game. In the early exchanges Oadby drove into the Harborough pack and an Laurence Joel penalty was matched by the Oadby full back to make the score after 10 minutes 3-3.

Harborough struck next with the highly competitive Ed Parker giving Harborough Colts the try that took them to an 8-3 lead. However just when it looked like this might settle the nerves a number of mistakes and penalties led to turnover ball and Oadby capitalised with a score of their own (8-8).

In the second half Oadby raised their game and pressurised Harborough and any ball was slow and laboured. Oadby always look dangerous and a high bounce led to an opportunist try for the Oadby left winger.

As the clock ticked away and countless Harborough attacks were thwarted the cup looked like it was going to Oadby. Harborough were not quite on their 'A game' and with just two minutes left were deep in their own half. A series of marauding forward drives, two quick penalties and suddenly Harborough were within a few metres of Oadby's line. A final Jack Digby drive pushed Harborough Colts over the line for a try.

With the score at 15-13 and only time for the conversion, Laurence Joel stepped up to the kicking tee. His effort sailed straight between the uprights and had salvaged a draw and a share of the County Cup.