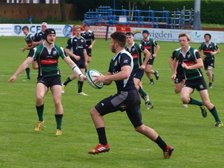 So Near And Yet So Far

Market Harborough Colts travelled to Bedford to play Ivybridge in what was without doubt the pinnacle of their season.

Market Harborough Colts travelled to Bedford to play Ivybridge in what was without doubt the pinnacle of their season. This time they were determined to be up for the game and give their all and this they did. Despite this playing up the slope they were at first tentative and lacked self-belief but started to show that they were easily a match for their West Country opponents. The first set pieces were the line outs and this became a very competitive area but the first scrum was a revelation as Harborough drove the Ivybridge pack backwards. This continued throughout the game but with a 1.5 limit on the drive, this dominance could not be turned into a real advantage and no penalties were awarded although Harborough did manage to steal some ball. Harborough snatched an early lead with a Lawrence Joel penalty but attempts to run the ball out of defence proved costly as Ivybridge secured quick turnover ball and moving the ball wide ran into to score the first try to take a 5-3 lead, the conversion coming back off the posts. Harborough regained the lead before half-time with another penalty by Joel but lost centre Jon Mundy with what turned out to be a broken wrist. Ivybridge had a man sinned binned for repeated infringement but were unable to make this advantage pay when despite being a man short it was Ivybridge who scored the try. Harborough safely secured the kick off but the eventual clearance kick went direct to a player who ran the ball back securing Ivybridge possession in the Harborough 22. A pre-planned move followed as they fed the incoming 13 who scythed through the defence to touch down for a try that was converted to give Ivybridge a 12-6 lead. From then on it was almost all Harborough as they repeatedly drove forward. A try eventually came as the ball came to George Thornton and there was no stopping him from 10 metres out. The conversion was missed leaving Harborough an agonising 1 point short. This became 4 points when Ivybridge hit back with a penalty but Harborough closed the gap again with a penalty of their own. The final 10 minutes saw Harborough make repeated attacks to the Ivybridge line but the options they chose never brought the reward they sought against a tight Ivybridge defence and as the final whistle blew with Harborough 15-14 down they sank to their knees knowing that this was an opportunity missed.So many individual contributions and unfair to single anyone out, a true team performance including those who did not make the matchday squad but neverthe less played a huge role in getting us there.

With more than half the squad still eligible to play next season they must now rebuild for a new campaign but this was without doubt an outstanding season for all involved.