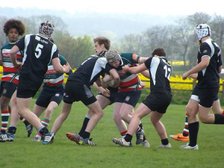 Harborough Colts visited Lutterworth for a final friendly match before they play in 2 finals over the next 9 days and came away with a narrow victory.

Harborough could perhaps count themselves lucky as they played for much of the game as though they were thinking of the games to come rather than the one they were playing in.

Initially the visitors took the ball to Lutterworth but made far too many mistakes when they could have scored. This gave confidence to a well drilled Lutterworth side who always looked more likely to score first and that proved to be the case when they showed great movement to break through the defence for a try that went unconverted.

With a 5-0 deficit at half time Harborough began to play with more belief but they were struggling in the set pieces notably in the scrum where they were being pushed back and losing ball. They then failed to tackle a break from the back row and Lutterworth capitalised when their 7 touched down following an excellent solo effort. Not to be outdone Harborough struck back quickly when a series of attacking moves ended with Joe Margetts crashing over for an unconverted try.

As the game moved into the final 10 minutes Harborough began to play with more belief using their pick and drive game. Holes began to show in the Lutterworth defence allowing the ever present Frank Tufail-Smith to touch down in the corner. This brought the scores level but an excellent conversion by Jake Noble saw Harborough take the lead 12-10. They then held out for the final 8 minutes, despite losing Tufail-Smith to the sin bin, to secure what at one time looked to be an unlikely victory.

The Colts now move on to Welford Road on Wednesday 30th to face Oadby Wyggs in the County Cup Final before playing in the National Plate Final at Bedford on Monday 5 May against Ivybridge.