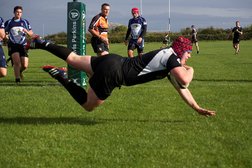 George Thornton showed power and speed at Number 8 to run in 4 of Harborough Colts 5 tries as they overcome a useful Leicester Forest team at Northampton Road on Saturday. As if often the case they started slowly and gave away penalties which Forest took full advantage of to take an early lead. But then the Thornton party started taking the ball from his loose forwards his power and strength took him over the line for his first score which he followed up with 2 others before half time showing that he has pace. James Stubbs converted 2 and at half-time Harborough were 19-6 to the good. They started the second half strongly, adding 3 points from a penalty and were clearly on top although their defence had to be good to keep out repeated attacks on their line by Forest. A fourth try followed after continued driving by the pack and when the ball was released to the backs and well worked move saw Joe Margetts weave through the defence to touch down. Thorton was not yet done and saved his best for last as straight from the kick off Harborough secured the ball and receiving the ball on his own 10 metre line he showed pace to outstrip the defence for a try with Stubbs adding the points to bring the total to 34-6. Harborough then relaxed and Forest showed what they could deliver by running in 2 tries themselves with the conversions bringing the final score to 34-20. A resounding victory but Harborough need to tighten up their defence in certain areas if they are to have a successful season.
Share via
FacebookTwitter
https://www.pitchero.com/clubs
Recent news