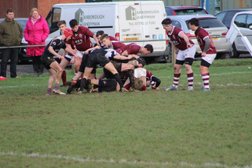 Harborough dominated this game to record their first league win, turning the recent improvement into much needed points. The game at Northampton Road was also the first which a full squad of 22 was available and it made a real difference. Right from the off the Blacks of Harborough established a base camp in the opposition half and stayed there for most of the first half. After only 5 minutes pressure told and after moving the ball to the right wing Liam Douglas powered over to score. 5-0. Minutes later even better ball handling released Douglas again to claim a second try 10-0. More success on the right hand side was still to come with Fraser Harrop finding a massive hole in the defence to dot down under the posts which he converted himself 17-0. With the forwards doing great work in retaining ball and making ground, the pack powered flanker Joe Price close to the line, quick ball and a pick and go from 2nd row Fraser Smith to score before half time. HT 22-0
Melton came out with great spirit in the second half and pinned the hosts back in their own 22 and won a number of penalties without being able to put a move together that threatened the line. Gradually Harborough’s dominance returned, Harrop slotting over a penalty 25-0 before good pressure from the forwards on the right allowed the ball to be moved quickly to the other flank and winger Harry Wells to score after a juggling act over the line. Ft 30-0
Share via
FacebookTwitter
https://www.pitchero.com/clubs
Recent news