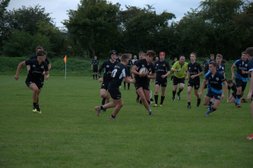 The Price is right!

Market Harborough Colts lined up against St Neots at home with a blustery wind running across the pitch, fielding a full squad for the first time this year but nervous not, knowing the strength of the opposition. The first half started with the visitors larger pack dominating territory without ever seriously threatening, however, the Harborough backs with ball in hand looked dangerous on the counter. Mason Tye, coming off his wing put the St Neots defence under pressure and slipped the ball outside to his fellow winger Ed Duggan for the first score 5-0 but this was to be the high point of the half for the home side. St Neots came back aided by indiscipline at the contact area and players ‘chirping’ about decisions gave St Neots field position which they took advantage of driving over in the corner HT 5-5

With coaches admonishments still ringing in their ears Harborough took the game to St Neots, clever kicking and use of the wind put our lads in the 22 and they were rewarded with a try for Captain Joe Price after a series of good phases and control of the ball 10-5. Standout back rowers Connor Kendrick on debut and Fraser Smith were putting the opposition ball carriers under serious pressure and making good yardage themselves but it was centres Geordan Stout and Bryn Williams that combined well to release Tye to get the scoreboard moving 15-5. This was soon followed by a score for full back Liam Douglas after great work by Duggan on the right wing 20-5. Harborough were now getting into gear and the next try was a superb individual effort by Stout, running in from the halfway line jinking this way and that 25-5. As a counterpoint to that solo try the fifth which was a masterpiece of offloading along the right wing involving Smith, Williams and Oscar Kay, any one of 3 other support runners could have scored but Price was there to dot down for his second 30-5. In a rare attack St Neots gained a consolation when there Scrum half went over unchallenged after a short penalty. 30-12. Harborough finished strongly with replacement winger Morgan Jones scoring and Liam Douglas finally finding his range to convert FT 37-12