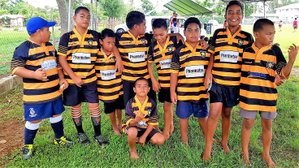 Elisi Vunipola, Marlborough Rugby Club's first team coach arrived back in his homeland, Tonga for a well-earned end of season break but had two other special reasons to be there. One was to be at his nephew's wedding - Billy Vunipola, England and Saracens No8 is going back home to marry his partner, but the other was to hand out the 50Kg of Marlborough Rugby playing kit flown over to the island for Tonga's many talented young rugby players.

As reported on marlborough.news in March, Marlborough RFC had plenty of surplus kit in either new or very good condition lying around. Changes in sponsors and team colours means that kit has a relatively short life whilst being still fairly new with many years of life still ahead.

MRFC's sponsorship by Compeed®, a three year arrangement that kicked off last season meant that a wholesale change in kit was necessary. Compeed’s first season of sponsoring the whole Club meant that every mini/junior member had their own shirt to train and play in, plus providing match day kit for the colts and both senior sides, as well as post protectors and flags. Hence the unusually large volume of redundant but very useable kit that was consigned to the clubhouse attic.

Rather than let this gather dust in storage area of the Marlborough RFC base on The Common, the club, along with SOS Kit Aid, a charity specialising in recycling sports kit for young players in both UK and overseas decided to donate this to the young Tongan players and with a bit of assistance from sponsor, estate agent Jones Robinson this consignment was packaged up and flown to Tonga in readiness for Elisi's arrival.

Tonga's next generation Centre and Full Backs?
As can be seen, the children were delighted with the kit as many of the children’s families would struggle to afford new kit for their budding rugby players.

Marlborough Rugby Club is keen to recycle redundant kit that isn't needed or used any more and to help the grass roots of the game in places like Tonga where rugby is a major sport and played by kids who love the game and want to improve.

The Club has a very strong affiliation with Tonga, through Elisi and some of the other players, so this next generation of young Tongan players are now part of the extended family of what is Marlborough Rugby Club.

This won't be a one-off. When this current generation of Compeed® sponsored kit needs to be changed, this will also take the same route East and end up gracing the young players in Tonga.

The latest Compeed era shirts can next be seen on the backs of the 1st XV when the new season kicks off at home (The Common) on 7 September against Salisbury.