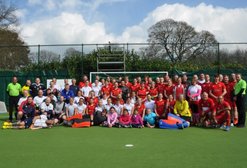 On Saturday 13 April 2019, Marlow HC hosted Nordics HC (a United Services Club) for the inaugural Hils Farrar-Hockley Memorial Trophy, held to commemorate our beloved Hils, who tragically died last September on his way to our season opener.
Hils was a pivotal member of both clubs for over 30 years as player, umpire, fixtures secretary and a host of background roles which he fulfilled with zeal, equanimity and good humour, gaining the love of all who met him in the hockey community. As Graham Sweet, retired Chairman of Marlow HC observed, “Hils was a person who has done so much for Marlow hockey and it is right that we should commemorate him this way.” 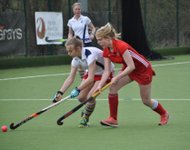 The ladies started proceedings, with some Marlow players volunteering to become honorary Nordics in order to provide a full squad. A crowd ranging in age from seasoned veterans to the youngest juniors enjoyed a close match on a bright spring afternoon, with the final score of 2-2 setting the scene for the following mens’ match. The mens’ first half proved tight, but superior numbers enabled Marlow to prevail in the second, running out eventual 4-1 winners. Match fees were donated to Hils’s chosen charity, Hockey for Heroes.
Hils’s widow, Kim, presented the trophy to Marlow in what is hoped will become an annual fixture. Jo Rees, Marlow Vice Chairman, said, “The turnout today represents how everyone feels about Hils: the ultimate volunteer, true gentleman and a friend who is sadly missed.” Patron of the Nordics, Sir Simon Bollom added, “It is a tremendous honour to be here today to celebrate the life of a great man. Hils was our Mr Hockey.” 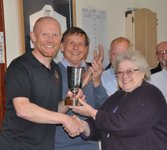