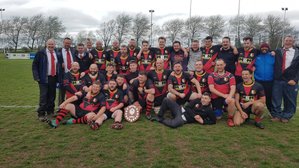 After a comprehensive victory over Stamford OB's back in April, here's a quick report from Barrie Stoutt

Meden Vale RFC travelled to newly revamped Newark Rugby Club to compete in the NLD Vase Final against Stamford. There is a long standing rivalry between these two clubs although they haven’t taken to the field for several years. A strong Meden Vale squad were accompanied by a large group of supporters who vociferously drove the team onwards from first whistle until the last – thanks everyone for coming!

It was a cold windy day but the squad warmed to the task quickly after stirring words from Brad Rhodes in the pre-match briefing. The tone for the day was set and continued immediately after kick off when Jonny Chick made huge hit on the Stamford receiver. The following scrummage saw the Vale front row decimate the opposition which the referee deemed to be illegal but Vale had sent a strong message. Vale continued to exert pressure on Stamford who scrambled to defend their lines. A set move from a lineout began the phases of play that led to the first try scored by Brad Rhodes which Ricky Geeson converted. 7-0. Vale's second try followed shortly after when Brad Rhodes scored from the base of a scrum which Ricky Geeson again converted. Ricky increased his tally with a penalty after a flowing move initiated by Matt Thom was stopped illegally. During the course of the half, Vales superiority limited Stamford to two opportunities but some resolute organised defence coupled with what can only be described as spectacular tackling by Jordan Duffus kept the opposition score at nil. William Murphy scored the final try of the half with a typical unstoppable drive from close range. Ricky Geeson converted a difficult kick. Vale went into the half time huddle 24 - 0.

Vale expected a different game in the second half because now they were playing into the wind. Changes in the formation were made because this is a squad game and everybody in the squad had earned the opportunity to play in the final. The second half commenced and as expected Stamford came back strongly. Vale weathered the early storm and slowly made ground into the opposition half. As vale got to within 5 meters of Stamford’s line, the forwards made numerous attempts to batter their way through a strong defence. A little bit of subtlety was needed, initially provided by Curtis Williams and finished off with an excellent try by Fergus Veal to open the scoring in the second half. Unfortunately, the conversion was missed but a penalty a few minutes later increased Vale’s lead to 32 – 0. Conor Stewart capped a fine display with the second try of the half. Brad Rhodes completed his hat-trick but left the field immediately afterwards due to a head injury. Ricky Geeson finished the game with a try of his own and yet another conversion giving a final score of 49 - 0

Stamford played well in patches, despite the score line, but it was agreed that this was one of the best squad performances in probably 3 seasons or more. Every single player whether they just travelled or played the full game contributed to this victory. We haven’t had the best season but this shows what we can do if we all turn up and most importantly that we train.
The arrival of Jackson Clarke and Ben Gwillim as well as the other new lads has enthused and reinvigorated the club since Christmas. It looks likely that we will have a new coach, Owen Taylor, who comes to us from Thornensians RUFC in Yorkshire. We hope he will help us to create a new playing strategy and help us to realise the potential within the club. The older players are looking over their shoulders and we hope that the competition within the squad will improve the playing standards.