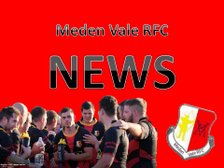 This August will see Vale face a new club as well as our local rivals.

This August will see Meden Vale play two pre-season friendlies, as well as complete a full pre-season training schedule. With training set to commence next week (Thursday 4th July), we look forward to Welcoming Head Coach Owen Taylor's old side, Thornensians RUFC. Thornensians hail from Thorne near Doncaster, and will be bringing a mix of 2nd teamers and development players to play in a training game of 4 x 20 minute quarters. Thorne 2nd XV, also known as the Lions, play their rugby in the South Yorkshire Merit Leagues, with the First team playing their Rugby in Yorkshire 2 (L8).

As well as this, the end of August will see Meden Vale travel to Mansfield 1st, who currently play their Rugby in Midland 3 East (North) (L8). This will be the first time in a long time that the club will have played Mansfield's flagship side, and will look to relish the challenge.

Head Coach Owen Taylor has said "We have a great opportunity inviting Thorne 2nds to Meden Vale. They boast a young side (like ourselves) and pride themselves on a big forward back to set a platform for their back line, much like we will be looking to achieve this season. With it being a training game, both sides should be able to boast large numbers and we will try out some different players in different positions. I have great links with the club, so this for us is a chance to try something new against a team very well matched to ours". Regarding the Mansfield fixture, Owen has said "I know all the lads are excited to play Mansfield. Historically they have always been the top team round where we are, but we have an opportunity to face an opponent in the league above ours, to give a benchmark performance and show the east midlands what we are looking to achieve this season. It will be a hard test, but one that I think the lads will relish".

Training meet will remain as 19:00, with sessions starting at 19:15 sharp. "It is crucial that we get good numbers for pre-season. We have a good programme in place, and we will look to build on the Stamford OB's result last season. There is much buzz around the club at the minute, something we have to materialise over the next few weeks.

Vale start their campaign at Home on the 7th September against North Hykeham. Full fixtures to be release once confirmed by the RFU.