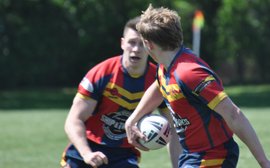 A huge day for Medway Dragons as our Reserve Grade made a start on a full season campaign for the first time, opening up the day against local opposition Invicta Panthers

The team was a blend of seasoned rugby league players and an 7 man contingent from the Dragons Under 18 squad (plus 1 in First Grade) who were on debut in the adult leagues. Andrew Woodrow was named Captain and was the perfect selection for the job. Leading a spine made up of Harry Meadows, Harry Bunyan Stan Orris, John Gallagher and with Jake Parkes at the back, it was a blend of youth, experience, crazy exuberance and sprit

The Dragons began well and the mix of experience and energetic youth got the upper hand in the early stages. Orchestrated by half back Stan Orris, the middles were dominant and enabled the halves to play a wide game from the start, backed up by good skills with the ands.

Sam Brown opened the the scoring with great athleticism, strong running and footwork as he reached over for the first try, converted by Parkes. The Dragons came straight back at them and crashed over again, just to the side of the posts when Aaron Marston kept up the momentum created by Harry Meadows and dotted the ball down to open up a twelve pointy lead after Parkes had converted.

On top, running amok, the team found a way to let the opposition back into the game and, with credit to them, every time the Dragons made an error, conceded a penalty, failed in some way, they were punished and found themselves behind 12-18 as half time approached. Sam Brown stepped up and scored his second, goaled by Parkes, to level it 18-18 at the break.

Some tough talking at half time brought the team back into focus, a re-set and better performances required in the second period.

Riley Carpenter, growing in confidence, sought the football and was tearing holes into the defence. He was rewarded with a try to set the Dragons on their way in the second stanza. Jake Parkes, bouncing back into the game after a couple of challenges showed everyone his potential by tacking on the extras.

Fili Laqeratabua was having a big day with his ball carrying, hands and feet, stepping and smashing his way over the line to push the score out further and Parkes tacked on the extras.

The youngsters extravaganza continued as John Gallagher, amazed to be selected in his dream slot at '6', intercepted a pass 30 metres out and ran to the line, enjoying every step, almost blowing it and putting it down for an easy Parkes conversion.

Sam Brown sealed the game with a hat trick as he pushed the score out to 40. By way of warning, two late converted tries were conceded to show the brand new, young team that you can never switch off.

Reserves Coach Martin Coyd said 'This was a big day and I am pleased for all those who were part of it. It was a mixture of club legends, youngsters on our pathway, returning players and some new to the game. We were bound to be a bit clunky and it was no surprise that we came undone at times'

'I can not fault the effort and pride in our jersey and it was great to see a supportive crowd getting behind the lads. There were a couple of special performances out there, ones which enabled us to dominate the game and give people confidence and have a did at senior football'

'If pushed for a best bit, it would be the performance of the players who thought they were playing Under 18 football this year. They have been training hard for a couple of years now, been accepted by the Senior Players and are our future. Played hard, done good today'