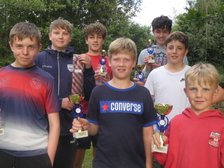 A great finish to a strange season

After the strangest season, our U12, 14 and 16s met up for some pre season training for next year and we took the time to acknowledge their efforts over a 10 month season that's been interrupted on many occasions. We managed to get the boys out 41 times this season and they recorded wins in 70% of their games.

Our U12s, young to say the least, had a really strong season winning 9 of their 13 games. There's some real talent coming through and congratulations to last night's award winners - Joseph Rayner, Dylan Hodgson and Noah Morgan.

Recording big wins or narrow defeats our U14s played many matches against arguably the strongest team in this age group, Heaton Mersey / Norbury who pipped us each time we played them but they performed brilliantly throughout season. Congratulations to James Smith, Miles Plant and Miles Qualter who picked up last night's awards.

In our U16s we saw some consistently brilliant performances by many in this team. In our "down year" these boys boxed well above their weight but maybe sometimes just a step off the boys at Cheadle and Stockport. Looking at the strength and depth in next year's squad these boys should be excited about the season ahead. Well done to Jamie Mochan, George Shonfeld and Joey Bissell at last nights presentation.

So the curtain falls on our season but we'll be back again after the summer break. With The Cage getting its much awaiting transformation this summer we're looking forward to seeing the kids putting in some practise over the holidays