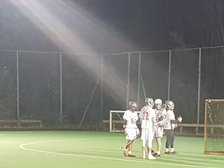 This seasons first U19 Floodlit game

The U19 campaign got off tonight to a very solid start for Mellor. After their recent victory in the Ted Donnet Cup Mellor were always likely to be favourites for this game. However, Poynton put in a feisty and well organised performance and managed to make things difficult for most of the game. It was a well fought contest and Mellor’s defence in particular looked strong and disciplined. Time and again Poynton, lacking a cutting edge, found the way was barred by Mellor’s long poles, Nick Hughes, Rory Fell and Issac Young. On the few occasions the Poynton attack did manage to break through, Will Macdonald was on hand to tidy up in goal. Up front Mellor took a while to settle and there were too many wayward passes. The first quarter ended all square at 1-1. By halftime a couple more goals by Dan Jones had put some clear blue water between the teams and during the second half Mellor were slowly able to turn the screws. Matt Watson and Dan added another couple in the 3rd and in the 4th Josh Pink got a well deserved goal after some robust challenges from the frustrated Poynton defence. Matt Watson popped in Mellor’s final goal and the game slowed down to walking pace by the end. A great start from Mellor and a welcome coaching return for Andy Hussey. If Mellor’s defence can maintain this standard they should do well in what is likely to be a tough league.