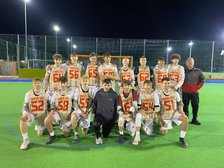 Great performance by our U19 mens team

This was another very impressive victory for Mellor on a damp showery evening in Timperley. The playing surface was slick and so was Mellor’s formidable midfield which pinged the ball around with speed and efficiency. The finishing was brutally effective and Mellor, scoring mainly on the break, never really looked like losing this match. That’s not to say that Sheffield weren’t difficult opponents. As always with Sheffield sides they were well organised and well drilled. They won the majority of the face-offs which gave them a lot of possession overall, however they were beaten back by a disciplined Mellor defence and when the play switched to attack Mellor were clinically efficient.

Mellor went a controversial goal down at the start, hotly disputed by the defence who thought it came off the keeper and never hit the back of the net. However, the play soon switched to the other end and a quick series of passes ended with a fine Ben Mochan goal. Mellor proceeded to score another three goals to end the first quarter 4-2 up. The second quarter was the Dan Jones show as he scored three beauties including one from the right which foxed a Sheffield coach who had been assuring his team Dan never did this. Sheffield didn’t give up but by halftime the lead had extended to 8-4. In the third quarter Isaac Young scored a superb solo goal running from deep inside his own half. Josh Pink was also starting to make his presence felt with his lightning speed and precise shooting. Sheffield failed to score in this quarter despite seeing a fair amount of possession and it ended 11-4. In the final quarter Mellor stepped up another gear and Sheffield’s heads went down. Cameron Major provided great link up play from defence to attack. Ben Mochan worked the crease well for his goals and Josh Poke managed to slam in a trademark effort. At the other end Will Macdonald made a terrific one-on-one save to deny Sheffield yet again. Mellor finished on a high and a 17th goal was disallowed, flying in moments after the whistle. The rain fell yet again but failed to dampen the spirits of this talented Mellor U19s team. Despite the weather they were a pleasure to watch.