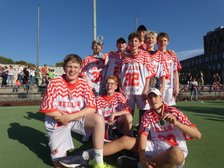 A brutal final and a game they'll never forget

So 9 boys headed off to Frankfurt on Friday for us to take part in one of Europe's best Lacrosse tournaments. Not knowing what to expect the boys faced teams from Belgium and Germany on Day 1 notching up 3 impressive wins in quick succession. After a night on the town they steamrollered Poland to top their group and set up a final against Sokol - a bunch of 15 year olds from the Czech Republic who, earlier in the day had had their game suspended due to unnecessary aggression - it didnt bode well for us and Sokol had won every Scheider Cup in recent years.

What followed was incredible. Mellor shot into a 3 - 0 lead as our opponents seemed hell bent on sending us to A&E! There were more flags being thrown than the referees could count and our boys simply plugged away, passed the ball and took every chance they had. Ned was superb in goal with Joey and Noah limiting our opponents all game. Toby bullied them at face off with George & Ollie bossing our midfield whilst Josh and Jamie ran riot in attack against defenders that just couldn't cope with your handling.

A brilliant weekend for all concerned and some very bruised boys hobbling off to school this morning!