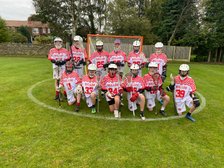 U14s back after Christmas with another home win

Friendly scrimmage against Brooklands after the festive break

Just a short report this week for what was a friendly fixture against Brooklands who had fielded eight players for the match, giving Mellor a chance to lend players and to mix up the teams. With a number of notable absences including Jamie, George and Toby and our usual coach’s away, Alistair Hodgson stepped in to manage the team. The first two quarters were all Mellor, going six-nil up and including two early and well taken goals from Ellis, with Josh, Finn and Eddie also getting on the scoresheet. More of the same in quarter two with Mellor going 12 nil up. Lots of patient passing in the build ups and fast ball movement were key, with a special mention to Sam Simms whose outside shooting was excellent today.

Following more changes there was definitely a more relaxed feel to the second half with Brooklands holding us to just three more goals and Josh putting four on the scoresheet for Brooklands. Standout performances from Sam and Theo who both battled well and did a lot to dictate the pace of the game. More akin to a scrimmage match this was a gentle new year return to lacrosse for the boys and no doubt more testing and serious games await as we go into the cup competition in coming weeks.