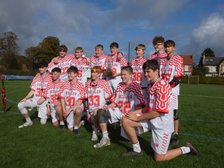 U14s secure The Centurion Cup in a tight game against Timperley

One of the oldest cups in the game, Mellor have only held this one 3 times in its 60 year history - 1993, 2016 and now 2020. Reading the match report from 2016 last night we had a group of players, several of whom have gone on to represent the club at international level. Looking at today's team we were certainly watching the next wave of players to follow in their footsteps.

The day started with a rallying call from outgoing coach Rick Shonfeld, plus a reminder that we were playing today for a very special young lady. Despite the strange circumstances caused by COVID the boys quickly got down to business but always knowing that Timperley would push us every step of the way.

A cagy start saw us edge Q1 4 - 3 but it was the 2nd quarter that saw us start to influence the game taking us to a 10 - 5 lead at half time - a lead that we kept throughout the game.

We needed a big game from our more experienced players - they all delivered with George, Will, Jamie and Josh giving us a spine from which we could build. Defensively we were excellent at times with Fredrick, sporting little more than body pads and sturdy Y Fronts, making some good saves even when their attack were wide open. Timperley's front 3 are canny and mobile and caused us problems throughout the games. Will Hodgson's forward runs were superb and the final pass or shot even better. James Smith, playing up, looked well within his comfort zone but needed eyes in the back of his head all day and Noah Barlow showed the silky skills that he's developed with that Long Pole over Lockdown. Toby Hall was immense as LSM and held Timperley at bay throughout the game.

Up front, George was a thorn in their side all game - tough, tenacious and a handful every time he had the ball. Supported by Jack Royle and Josh Myers, they started to eek out chances as they started to move quicker in the final third. Finn Howie particularly impressed too with some well take goals but also in how he played - tougher and with much more confidence at this higher age group.

Jake Fell, Toby Hall, Sam Simms and James Peel all played their part in helping us to retain the ball in midfield with Jamie Mochan covering ground from first to last minute and firing some great long range goals when we needed them most. The speed with which we moved the ball was mesmerising at times and we're really starting to see what happens when a bunch of lads play together for so long.

Timperley played their part throughout the game and were unlucky to strike the goal frame on several occasions. Always organised and well - drilled they clearly had a plan to deal with some of our individual players but when a team plays as one it's tough to pin point individuals.

So this team will split up for a season and I'm sure next years U14s will fancy their chances next year. For now though this was a great way to end last season and start this one - well done boys, you're a credit to us. Massive thanks too to Dan Watson - the style of coaching that Dan brings is just what this crop of players needs right now and the outlook for the season is rosy!

I don't know who scored and assisted today's goals - they came from across the team so you can all see the video when its ready.