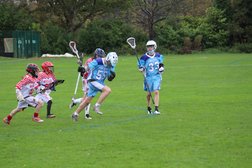 Two years ago, when this group of lads last met, Mellor and Timperley were the best teams in what was the U12s league. Although we’ve not seen others play yet, I suspect it’ll be the same this time round at u14s. Furthermore, if we’re going to win the cup this year, we’re going to have to find a way, somehow, of coping with their key players, particularly #56

We play the Mellor way - pass the ball, work it round the goal, create openings and involve all our players and generally it works pretty well. We did the same in this game and always looked threatening and to be fair, scored plenty, with some nicely worked goals.

Playing against players that are capable of going straight to goal is tough so it’s up to us to learn how to deal with this. We learnt and started to adapt today but it wasn’t quite enough.

We also missed our larger players, Robbie and Henry, so were two long poles short, and it showed. And a late drop out from our sharp shooter, Miles P, also made a difference, although our lower age boys, Cam and Charlie, played superbly and scored 7 between them. We battled hard and were always within one or two until we ran out of steam in Q4.

I’m hopeful for next time we meet - add the three who were missing and what we’ve learnt from this game and the next game will be a winnable game.