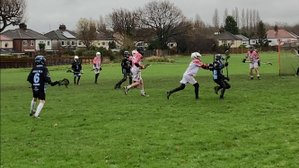 Under 14s back to winning ways

Having only played once so far this season, which was way back in October, Mellor arrived at Cheadle Hulme desperate to be let off the leash in what were perfect mud dog conditions !

The boys didn’t disappoint, energy levels were high and we immediately took control of the game as Finn raced direct to goal and scored. CH restarted but our defence held firm, we quickly regained possession and Eddie went through to score. The pattern for the game was set - Mellor just being too strong, skilful and committed against a CH side which appeared to be a bit too reticent to engage with our boys. Further goals from Miles P, Miles Q, James K, then Finn and Eddie again made it 7 - 0 in Q1.

The defence of Frederick, Robbie, Ollie and James were impenetrable, well with the exception of the first play of the second quarter when Mellor shipped their only goal. Otherwise further goals from Finn, Eddie and James K made it 12 - 1 at half time.

The second half wasn’t much different to be honest. CH were up against it and understandably struggled to keep their heads up as the game progressed. Mellor scored another 9 without really getting out of 2nd gear, with goals aplenty particularly from Finn, who got 8 in all, including a nice behind the head shot, and Eddie with 5. Ollie had a great game at the back, consistently clearing up then venturing forward to set up the attacks. Although not much to do in terms of saves Frederick showed some good distribution, and our midfield battled hard.

They’ll be harder tests for the boys, but the omens for the season are good. Add the boys who sat this one out, and the team looks very strong, bring on the next fixture !