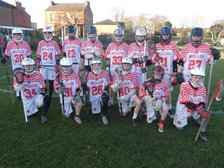 Combined Heaton Mersey / Norbury side too strong for Mellor

Starting with the positives, the weather was lovely, we were outside, and we were playing lacrosse ! And we were just about in the game until the last quarter, although truth be told we were never convincing....and never in the lead.

First, we knew this was going to be a tough gig. Mersey are always a well drilled, strong lacrosse outfit, and when we played this group of boys two years ago we had close games, with Mellor just on top. In their intervening period Mersey must have lost a few players, because added to this team were now a number of good Norbury boys, making them a formidable and large outfit, dwarfing our team, who aren’t the biggest unit anyhow!

The game started slowly as both teams felt it each out and defences were on top. Mersey took first blood but we were only one down at the end of the first quarter. Into Q2 and Finn equalised with a long range shot and we were all square. It was a cagey affair, defences again on top but Mersey squeaked one in before a solo effort from Charlie meant we were level at half time. Bad news though - James S twists his knee and one of our key players looks like he’ll be out of the game.

Into Q3 and it’s low scoring again, but Mellor are getting increasingly frustrated as they give away possession too easily and the defence are put on the rack again. They cope reasonably well without james, with Henry filling in, but concede two more - one due to pressure on Frederick who gets caught resulting from a lack of passing options, before we conjure up our first goal with an assist as Eddie finds Miles P to score. So, one down with a quarter to go and we’re holding on.

Into the last quarter and Mersey do what they were threatening for most of the game and take control of the match. Even a returning James S can’t help, as we get outmuscled and outplayed, particularly in midfield, and the Mellor defence eventually starts to crumble. Charlie gets us a solo effort back but we lose 9 - 4.

Overall thoughts - combined with Norbury metro players this HM side is strong and large, and must be one of the favourites for the cup. However, we can and need to play better. Sure, a lack of game time hasn’t helped but we squandered hard won possession far too easily, lacked movement, with and without the ball, and ran into trouble rather than letting the ball do the work. We scored four goals, of which only one was due to an assist - which tells a story in itself.