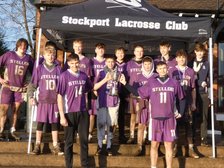 Stellor win the U16 JSN Final

8 months late but worth the wait

Mergers are funny things – they’re a bit like marriages – some are love at first sight, others start as a drunken snog in the boozer – Stellor fell somewhere in the middle!
It was a merger that raised a few eyebrows and even saw us being bizarrely berated for buying a kit for the boys – something that still baffles me to this day when you look at the number of mergers in all age groups at junior lacrosse.
Formed out of necessity these 2 teams coming together may have been unheard of a few years ago but when you look at this group of lads you can see the friendship and respect that’s developed over years of Metros and England Academies – 2 teams that play fast, direct and exciting lacrosse.
To reach this final was an achievement in itself and the result of dogged determination by a number of parents at both clubs. We fought hard to reach the JSN Cup Final, narrowly beating an excellent Heaton Mersey in the Semi Final, so pushed hard for this game to eventually get played. COVID did its best to stop it but a big thanks for Poynton for helping to get the game on and to Alison Cara at JSN for calmly dealing with my incessant emails!
Opting again to run out 3 of our 14-year-old players was a big call but, in the end, a necessity – they were excellent again linking up superbly with our older boys. A broken wrist yesterday for Dan O’Brien didn’t help matters so we were on the back foot before the whistle. Poynton are, without doubt, the strongest team in last year’s U16 league with Mike Bartlett at the helm and although we only lost narrowly to them in the league this was going to be a mountain to climb.
So, to the game…… It was a full-blooded affair from start to end, particularly at the end! Conditions were heavy, the rain fell but the lacrosse was of a great quality. Despite slipping behind at 2-3 the boys worked well and created many chances with Poynton’s keep on good form early on. The spine of the team was strong today, our younger players lifted their game and our defence was strong. Ned played without doubt his best game for Stellor – it could be argued that this was one of his best games ever but, from a strong backline, we created problems throughout the game to run our 10-6 victors.
To be fair to Poynton, COVID restrictions have seen them play little or no lacrosse in recent weeks and months and a lack of time to prepare may well have played a factor today too but that takes nothing away from what’s become a really tight team who, over 4 quarters, deserved the win.
So, “that purple Kit” now goes into its time capsule – it may never come out again but I want to thank everyone that’s made it such a worthwhile season – Lawrie Smail, Craig Davy, Will Sugden, Luca Schurink, Dave Peel, Nick Donovan and, most importantly the boys. Have a great Christmas and we look forward to meeting up again in the Blue of Stockport and the White of Mellor.
Share via
FacebookTwitter
https://www.pitchero.com/clubs
Recent news