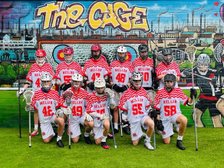 Under 16s quick off the mark to open their season

Strong start to the season against Stockport despite some key absences

With 5 of our starting 10 laid low with COVID and injuries this looked like an ominous tie against the team that pipped us in the Stockport 6s.

But, with debuts for Fredrick Jenkins, James Kennedy, James Smith, Finn Howie and Robbie Wilson we were tested early going 1 - 0 down within seconds of the start.

What followed was a brilliant team performance - our debutants stepped up and everyone took hold of the game from then until the final whistle. Our engine room of Jamie, George and drew ticked over all game but players who sometimes spend more time on the bench, such as Jack and Jake, put in fine performances today against a team that will definitely pose us more problems when we meet again. Noah was magnificent in defence too and Fredrick was an easy pick for today's Man Of The Match.

No prima donna's, just a great team performance made all the better by watching how our more experienced players encouraged and supported those making a fairly tough debut. As season starts go, this was one of the best and these boys are setting themselves up for a great season.