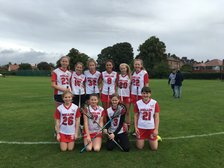 Winning Start for U15 Girls

U15 Girls, with some young debutants, win away at Brooklands in a close game where winning the draw was key.

Under grey skies but with the early season luxury of a perfectly presented pitch, U15 Mellor girls started the season low in numbers but awash with enthusiasm.
Eve and Olivia bravely “played up” for the first time, with the latter even agreeing to take on goalie duties for the first half. She was welcomed by an unintentional head shot from the very first attack of the game and Brooklands soon took an early lead.
Emily K though quickly restored parity and Miranda , following a weaving run and Annabel with a turnover and length of the pitch dash, made it 3-1 Mellor.
Brooklands scored with two goals on the break and although Miranda added another (after a neat pass from Katie H), Coach Nina was concerned enough to call a time out. A tactical change on the circle gave Mellor the edge as Emily K was dominating the draw.
Aimee scored with a low finish and then from a free position. Martha stopped an overlapping Brooklands attack single- handedly and Emily K fired home after a groundball pick up from Eve and an amazing interception from Matty.
Miranda added another two and the half ended 9-4.

At half time Mellor supporters watched on anxiously as Coach Nina prepared to deploy the hereto unfashionable “no goalie” formation – swamping the midfield and hoping to dominate possession.
Initially the decision seemed to have paid off as Miranda scored from the restart and although Brooklands were able to score more freely Mellor managed to respond with Matty and Miranda both netting left handed. The defence though started to come under increasing pressure with Harley (twice) and Annabel having to intercept attacks and cause turnovers. With Brooklands starting to reduce the deficit, the plan was abandoned and Katie H was put into goalie kit with speed that a Formula One pit crew would have been proud of. Nerves then started to dissipate. Matty scored from a post drive and Harley from a free position and the victory was secured.

Man of the match was awarded to Harley for a tireless Mid Def performance. Well done to all the girls for a great team effort. Next game Cheadle 9 Oct.