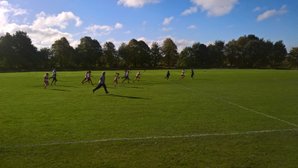 Mellor U15 Girls March on

With Stockport only having 8 players, both sides had to adapt to playing with reduced numbers on a full sized pitch with space a plenty.
Mellor quickly asserted their authority on the game with Emily K winning the first draw and Harley scoring after picking up a rebound.
Smaller teams meant only one player needed to be behind the restrainer and so breakaways were a feature throughout, the first falling to Stockport which was brilliantly saved by Ellie. Miranda scored with a crease roll and then added another with a quick stick after a neat pass from Harley.
Matty scored after a mazy run and after a Stockport replied with a goal, Annabelle got on the scoresheet adding two in quick succession.
A lull in the scoring then saw both sides start to be called for 3 seconds as tired legs started to affect marking and the referees had to intervene. Another save by Eliie (who was strong throughout) and a goal saving interception from Harley fell either side of a one on one dash to goal from Matty that entertained the crowd as it turned into a beguiling mixture of one part cradle to 3 parts juggle.
A switch of hands and cool finish top right from Emily K was followed by an Annabelle run and finish straight from the draw and the half ended 8-1.
The second half started with Harley scoring, a breakaway goal from Stockport and an immediate goal from Emily K. Stockport were starting to have a little more possession and Lucy had to work hard to track runners from deep.
Annabelle scored twice more and then set up another for Emily K. Mellor finished the stronger with Ellie saving again before Matty rolled the crease to score and Aimee adding the last just before the end of the game (and hotdogs and cake).
Share via
FacebookTwitter
https://www.pitchero.com/clubs
Recent news