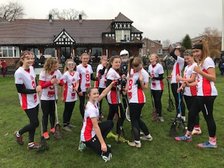 The Rain Held Off For Our Deserving Win!

Mellor U15 vs. Stockport

A great final score and a deserving win on a morning where the rain finally held off!

This was a game the girls were determined to win. Some fabulous opening saves in the first quarter by Liv headed off an early attack by Stockport. But Mellor stole a march and secured those early goals that gave them the lead they were after. Ruby was at ease popping in some low, ground goals in the opening quarter aided by some super assists.

The second quarter secured further goals by Ruby [again] and Eve and Leia to keep Mellor out front. There were lots of “some lovely cuts’ comments from Coach Dan and Stockport’s feisty, fit and fast No 10 gave Leia some great runs. Much improved passing, those low ground balls and some further sterling saves by Liv saw a challenged Stockport defence. Fielding some of the younger U13 players in the last 2 quarters gave them valuable game time whilst they really played collaboratively and smartly with their older teammates. Mellor continued to dominate the game with a final score line of 18-5 with Ruby netting 9 of those goals!

It was a pacey game, some great sportsmanship and a deserving win for Mellor on a slightly chilly Sunday morning.