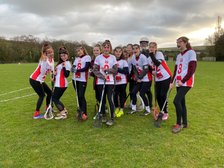 On an extremely cold Sunday morning both teams arrived ready for a challenging game, Timperley set off with a strong start and in the first quarter we found ourselves 3-0 down very quickly, we rallied to bring it back 3-1 goal from Ruby with a great save from liv to keep us in the game .Alice W fighting to keep the ball and an assist from Jasmine to Ruby who scored to end the first quarter 3-2.

The 2nd quarter was fast paced from end to end Ava scored a fantastic goal to draw 3-3, quickly followed by a Timperley goal 4-3, a sneaky sliding shot from Ruby brought us back to 4-4 .Timperley scored again and then an assist from Jasmine and goal from Alice W 5-5. Timperley scored again 6-5 with a nice save from liv 1 on 1 we finished at half time 6-5 down.

Timperley scored soon after the half time break quickly followed by 3 further goals taking the score to 10-5 –time out in the 3rd quarter called by Mellor saw Mellor return with a fighting spirit, Milly scored immediately, assisted by Alice W Eve scored with an amazing goal straight to goal .We were fighting back showing true Mellor determination coming from behind trying to even up the score .An assist from Eve gave Ruby another goal 10-8.

We went into the final quarter 11-8 down at 12-8 down we dug deep and found the strength to battle further all working together as a team showing a strong team spirit encouraging and helping each other .An assist from Amelie allowed Ruby to score 12-9.From the centre Amelie won the draw and assisted Ruby for yet another goal 12-10 with all still to play for. Amelie was on fire in centre and won the draw again straight to Ruby again another 2 goals for Ruby 12-12 . An assist from Ava to Alice who scored gave us advantage 12-13, Timperley quickly equalised 13-13 you could hear a pin drop on the side lines . Jasmine ,Alice T, Beany ,Amy were tested in defence with some tough ground battles occurring .Dan was being kept up to date via the phone, with less than 5 minutes until the end of the game Mellor went 14-13 ahead with a fantastic fast sliding goal from Ruby ,Timperley equalised and in the final minutes of the game took the lead 15-14 to beat us by a very narrow lead in the last 30 seconds of the game .

All the girls played remarkably well they showed determination, had fun and enjoyed the game from attack to mid and defence everyone fought hard to try and win ,it was great to see the Timperley girls staying for some well-deserved hospitality with the now famous “Emma Wilson chip butties “.