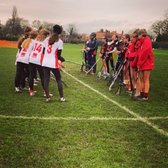 Perseverance and Grit from the Mellor Girls

On a sludgy grey Sunday morning Mellor U15 girls showed up for a competitive game resulting in an 11-3 win to Brooklands.

The final score, perhaps didn’t reflect the effort that the U15’s showed against a well organised and more mature team.

Mellor ‘D - fence’ collectively demonstrated perseverance and patience against the consistent threat presented by the opposition.

Defence did a sterling job of slowing the opposition down, against a fair few fast breaks, with some memorable checking and defensive body action thrown in too!

Key to the defensive system was an impressively defended goal, which impacted positively on the final score.

Attack demonstrated a steely ability to remain calm and considered against a strong defence with some notable moments of thoughtful and creative play.

Meanwhile, midfield demonstrated true grit when unleashing some rather fierce, fast and fabulous action, resulting in several turnovers that no doubt prevented further opportunities for Brooklands to increase their lead.

All in all a fine demonstration of ‘keeping on keeping on’ - onto the next game now!