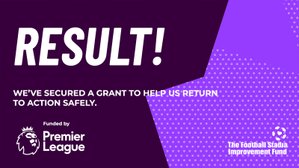 MERIDIAN VP AWARDED FUNDING TO HELP THEM RETURN TO ACTION

MVP can now meet the challenges caused by COVID-19

MERIDIAN VP AWARDED FUNDING TO HELP THEM RETURN TO ACTION

Great news for football in London SE7 today, as Meridian VP are celebrating receiving funding from the Premier League to help them prepare for the restart of football and safe return of supporters to their stadium.

The Matchday Support Fund grant will help Meridian VP put in place measures that will make their ground safer for the 2020/21 season given the challenges caused by COVID-19.

The Matchday Support Fund is managed by the Football Stadia Improvement Fund (FSIF), which is financed by the Premier League and supports non-league and Women’s Football Pyramid clubs with the cost of improvements to their grounds.

The Matchday Support Fund follows the recent Pitch and Club Preparation Funds, which saw £8.7m in grants awarded by the Premier League, The FA and Government’s Football Foundation to prepare the country’s playing surfaces and facilities for the return of football.

Dwinder Tamna Chairman of Meridian VP said: “The Matchday Support Fund has enabled us to put in measures that will now allow Meridian VP to receive spectators and supporters to games being staged at Meridian Sports & Social Club."