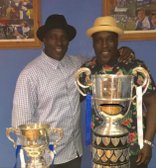 Owen Jones is the new Manager at Meridian VP.....

Owen Jones is the new Manager at Meridian VP.

The former Erith & Belvedere boss arrives in Charlton with his brother Rupert Jones as his right-hand man.

Rupert announced via Twitter: “I’m proud to announce the appointment of my brother Owen Jones as the manager of Meridian VP and I will be his assistant manager. His son George will be player coach.

“Owen did a great job at Erith & Belvedere, here’s to more success with Meridian.”

Meridian VP’s Chairman Dwinder Tamna has himself led the team out during recent season’s but has signalled his intent for the new campaign with this appointment.