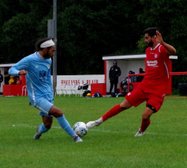 Preparations for the new season began on Saturday 8th August with Halls AFC providing the opposition. It was the Dartford based side who ran out 3-0 winners on the 3G pitch at Princess Park. Meridian VP Assistant Manager Sean Boothe stated after the game: “There were encouraging signs during our first Pre season game where fitness got the better of us on a very hot afternoon. It was good to be back with the Boys though.”

Seven days later Meridian VP entertained SCEFL Premier Division side Lordswood. It was the visitors who ran out 0-2 winners in a competitive and full blooded game. More minutes banked and some promising displays according to Sean.

Saturday August 22nd MVP travelled to Salters Lane to take on another Premier Division side Canterbury City. Billy Reavill put Meridian ahead after twenty minutes but the home side pulled one back in the second half to earn a draw. Sean Booth was pleased: “ A positive performance from the boys. They were very disciplined and determined all around the park. Great display of discipline from MVP and good work was demonstrated by all involved.”

Saturday 29th August Meridian VP travelled to Gillingham to take on Premier Division Hollands & Blair where they gave a good account of themselves eventually losing 2-0 thanks to two Ben Brown headers.